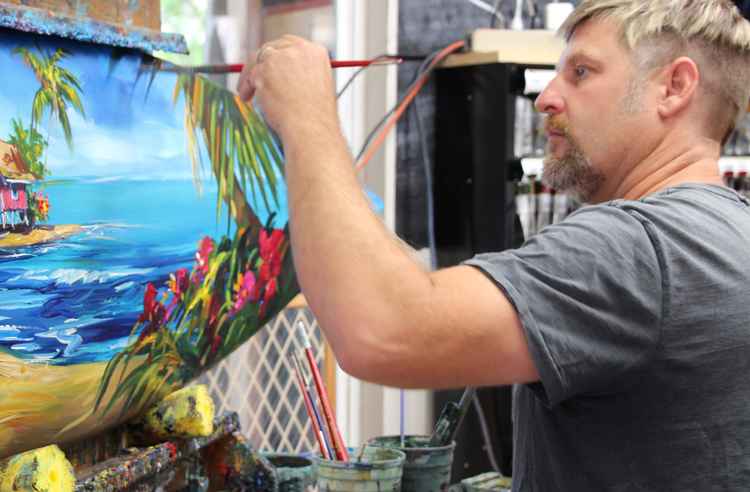 It seems fitting that the art of Steve Barton appears to move like the waves of the sea. The happy, carefree style he paints in is the essence of his personality—funloving, nostalgic and making waves across the fine-art scene.

Barton’s signature wavy canvases and frames are unmistakable characteristics of 95 percent of his paintings. The purpose is to give viewers another perspective that allows them to move with the painting and enjoy the intense sense of relaxation and good times the artist evokes. The vivid colors and heavy layering perfectly complement Barton’s most common subject matter – the beach.

Ironically, Barton’s journey to success as an artist began on the East Coast, far away from the current tropical setting in Southern California that now inspire his work. Painting was a way of life in Barton’s family. His mother was an oil painter who encouraged him to begin creating by the time he was 8 years old. Barton sold his first painting by age 16. Instead of the typical teenage fast food job, Barton exhibited his work at regional art fairs with his mom. On the weekends, he would sit in front of the covered New Hampshire bridges near his home and paint, waiting for passersby to stop and purchase one of his paintings.

"I’m dyslexic, and painting was the only thing I was ever good at,” Barton says. “It was always an outlet for me."

Barton's talend grew to more than an emotional outlet. He received the Congressional Art Award from the state of New Hampshire and was commissioned by Senator John Sununu to paint "The Old Man Mountain," an image of a local landmark. Between working construction at his family's business, and selling art he created at night, Barton was able to save enough money to attend the Rhode Island School of Design for a summer and Notre Dame College in Manchester, N.H., for a year. In 1992, when his finances ran short, Barton decided to pursue art through another route and moved all the way across the country to sunny California.

"Everyone told me that I couldn’t make a living as an artist if I didn’t go to school," Barton explains. "That way, they said, I could at least fall back on teaching if I had to. Then I realized if you have too much of a fallback plan, you never really put yourself out there. I didn’t want a Plan B because I wanted Plan A to work."

Making Plan A work was no easy task. Barton made only $5,000 during his first year painting in California. But the determined artist continued to "make it work." His first big break came when he convinced Village Gallery in Laguna Beach, Calif., to show one of his paintings.

The work sold the very first day. From there, the relationship grew, and Barton began learning the ins and outs of the commercial art industry. "I’ve seen so many great artists who haven’t made it because of a lack of exposure," Barton says. "Through my work with Village Gallery, I was able to learn that side."

The experience paid off. Barton began painting in front of the gallery for 12 hours a day on the weekends, and he continued doing so for six years in order to make a living as an artist. Everything expanded from there. One gallery turned into two and then three and so on. They were as close as Las Vegas and as far away as Hawaii. Now, Barton is represented in more than 40 galleries around the United States, including Florida, South Carolina, Arizona,& Texas,. Boxing champion Oscar de la Hoya, heavyweight Olympic gold medalist George Forman and NASCAR Driver Casey Mears are just a few of Barton's well-known collectors.

Barton says his style has gotten a little looser and more playful over the years, but it still holds that distinct look, which took root during his developing stages and resonates with collectors of all walks of life. Many of Barton’s paintings hold up to six intense layers, which create a combination of rough, textured spots and smoother areas. The layers keep the colors crisp and help correct any errors along the way. Although he is best known for his tropical scenes, Barton also paints still lifes, Mediterranean scenes, Midwestern and Southwestern themes and even portraits of treasured pets and favorite animals.

The year 1999 marked a turning point in Barton’s career that has grown into his greatest success yet. The introduction of the wavy canvas and frame gave Barton a signature look that’s rarely forgotten. The artist first creates a wave in the actual painting by painting on an angle and bending the horizon ever so slightly so the image appears to move and change as the viewer walks from one perspective to another.

"One day, I stretched a canvas too tight, and it made a bow," Barton explains. "Then, one thing led to another. I started painting to give the feeling of a 3-D painting. I created wavy stretcher bars and then moved to frames. It just makes it that much more playful and fun."

The response, Barton says, has been astonishing, but he admits that it can take some time for certain collectors to warm up to the concept. "Sometimes it takes a while for people because they can’t picture it in their homes," he explains. "But once I explain the sense of movement and the new perspective, it starts to grow on them. Then others absolutely love it."

The inspiration for Barton’s work comes mostly from his Southern California surroundings. He paints things that he believes might not be around for much longer, like an old surf shack or isolated beach area. He’s also partial to subjects that make him think about days past. When settling on any location as a subject, Barton takes in the setting, snaps some photos and sketches onsite. He then goes back to the studio to paint and embellish the work that emerges from the picture in his mind. Barton's art isn't limited to just wavy frames, he also paints one of a kind, original paintings on recycled surfboards - purchasing old boards from local kids and helping them to buy new ones.

Barton is a self-published artist, and he prefers it that way, given the complicated nature of the frames he produces and the fact that he has total control of his work.

Barton hand embellishes each of his pieces and offers limited editions of select works. He still participates in about 35 gallery shows per year and loves the interaction he gets with collectors.

In 2011, Barton was invited to join the licensed Disney Artist family which allows him to paint Disney characters into his scenes. He currently has 13 Disney themed Limited Editions available.

Barton has been busy with his latest project, a new line of mixed media, original painted Lucite Sculptures. It was a long process but he is pleased with the outcome and overwhelming response to this new product.

Looking to the future, he’s just enjoying life and doing what he does best—painting. "So many of my dreams have come true; I’m not sure what I want to do next," Barton admits. "I know it will have to be something new and fun that will take me in a whole new direction. That’s what art is all about."